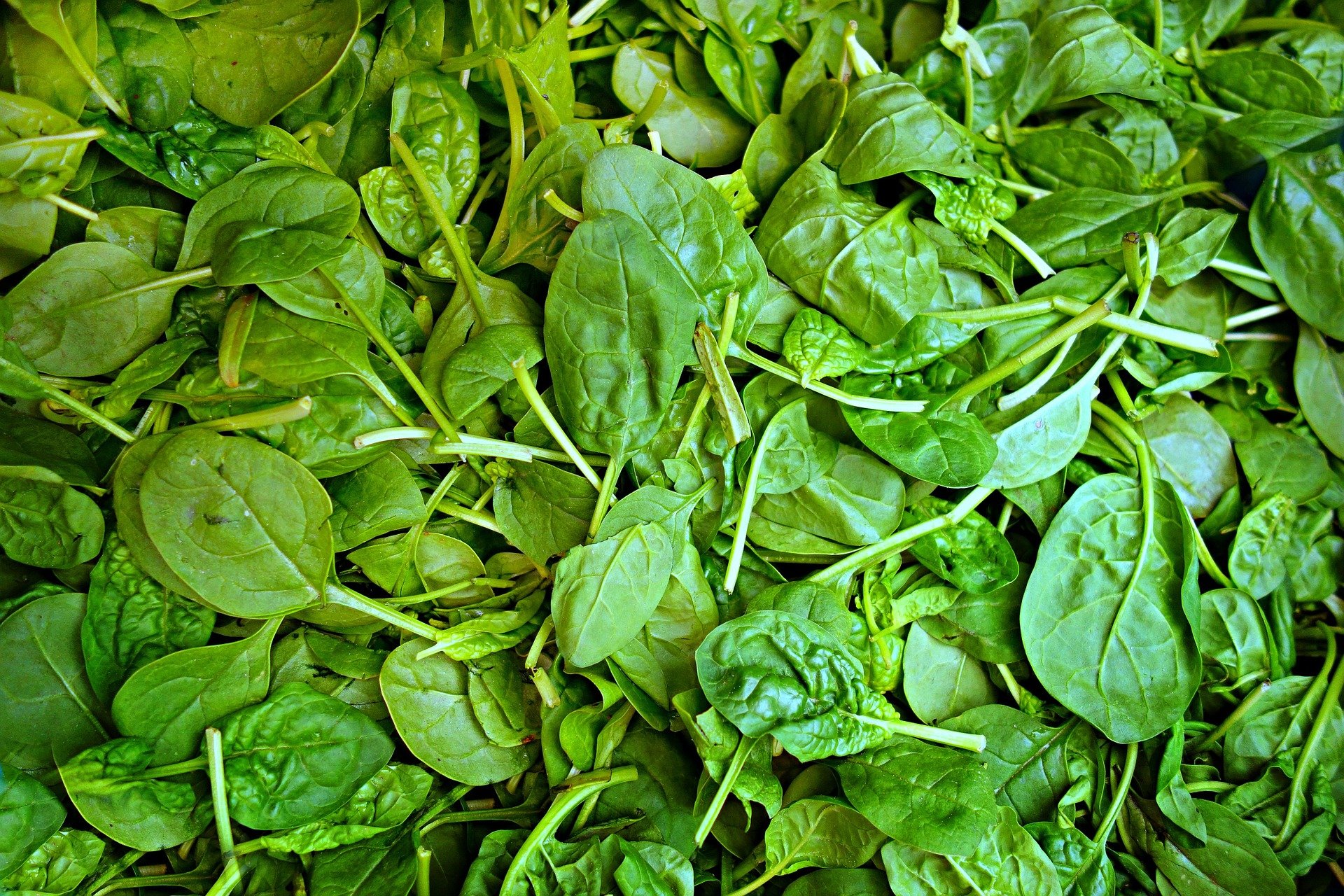 Superfoods are foods that are more nutritionally dense than other foods. This series explores not just the nutritional aspect of superfoods, but other factors including growing, preparing, and environmental impact.

Spinach is a great source of numerous micronutrients, many of which can have beneficial impacts on the body, including lower rates of depression, muscle growth, and fat loss.

There are three main varieties of spinach: savoy, semi-savoy, and flat-leafed. Each variety has different cultivars, or sub-varieties.

Savoy spinach is also known as curly-leafed spinach, because the leaves are more wrinkled and textured than flat-leafed spinach. Savoy spinach is crunchy and a little bitter, so it is often used for cooking. This variety is often sold in bunches. There are two further sub-varieties of savoy spinach: Regiment and Bloomsdale. Bloomsdale is an old variety of spinach, and the flavor almost resembles winter greens like kale and chard. Regiment spinach is more tender, and has a nutty flavor.

Two other common spinach varieties, New Zealand spinach and Malabar spinach, are not actually spinach varieties, but are colloquially called spinach due to their similarities to spinach. New Zealand spinach is in the fig-marigold family, and has a similar flavor to spinach when young. Malabar spinach is in the Basellaceae family of flowers, and is similar to spinach when cooked, but has notes of pepper and lemon when raw.

Because of the numerous varieties of spinach with different properties, at least one variety of spinach can be grown in most areas of the continental United States. In most regions, it can be planted in both early spring and fall; in milder climates, one winter crop can grow. Most varieties grow in about six weeks, which is a quick growing season. Spinach does best in moist, Nitrogen-rich soil with plenty of organic matter. 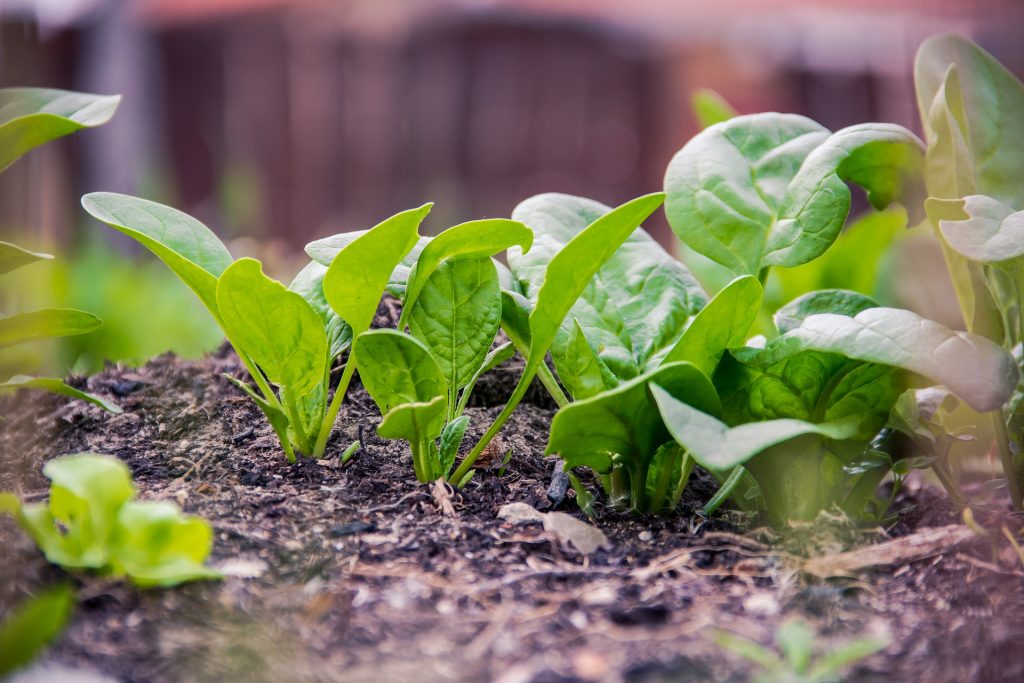 Because of the abundance of different varieties of spinach that can be grown in a diverse set of conditions, most consumers are able to find locally grown spinach when in season at farmers’ markets or other markets with fresh and local produce. Many markets will sell multiple different spinach varieties. Buying from a local market not only helps the local community, it also helps to ensure the spinach is as fresh as possible. At a farmers’ market, there is also the ability to discuss farming practices used to grow the spinach, including any pesticides used, insight that is not typically available at a grocery store.

The Environmental Working Group annually categorizes produce with the highest and lowest pesticide concentrations in their Dirty Dozen and Clean Fifteen lists. Spinach is number two on the Dirty Dozen list for 2020, meaning it has high pesticide concentrations. They found that over 90 percent of spinach samples tested positive for two or more different pesticides, and also found that spinach, along with kale, had higher levels of pesticides by weight than any other produce tested.

Research has shown that organic foods have lower pesticide residue concentrations than conventionally grown foods. So, for foods like spinach where there are high pesticide concentrations, buying organic can limit that exposure.

See below for how to properly wash to remove some pesticide residue, but keep in mind that depending on the pesticide, washing may not remove all of it. Washing should, at least, lower the amount of pesticides consumed. 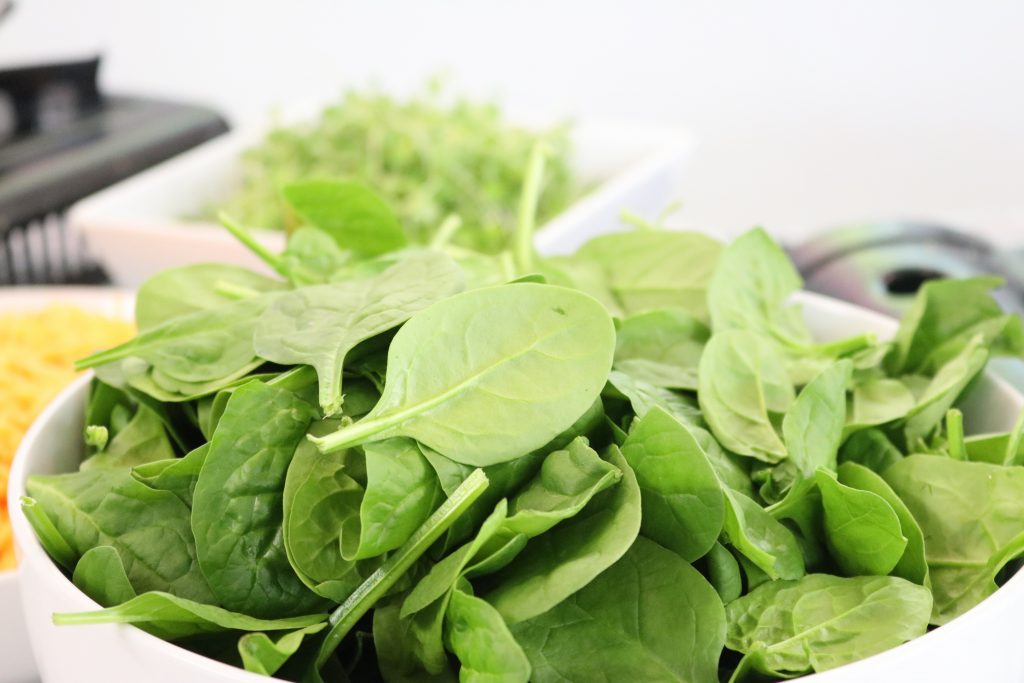 How to Choose at the Store or Market

Look for yellow leaves, insect damage, or wilted or crushed leaves, all of which are signs that the spinach is not at peak freshness. Fresh spinach will have vibrant green leaves and a springy texture. Smaller stems are preferable to thick stems, which can indicate that the spinach was picked too late and may be bitter. For bagged spinach, watch out for yellow leaves and excess moisture.

Before consuming spinach, it is important to wash it. Do not wash spinach and then store in the refrigerator because the spinach will wilt more quickly. Flat-leafed spinach typically collects less gritty dirt on it than curly savoy varieties, but even pre-washed spinach typically still has some dirt on it. Industrial washing is often a watered down bleach solution, which removes some dirt, but does little to remove bacteria or pesticides due to the quick washing the produce undergoes. Because of the nooks in spinach, research has indicated that the bleach doesn’t always reach all of the leaves, either, resulting in at least 90 percent of surface bacteria remaining after a bleach wash.

A diluted salt or vinegar solution can be used to wash spinach, but cold water is also sufficient. Instead of running the greens under the tap, which can cause the greens to wilt and doesn’t actually remove much dirt or pesticides, swish the greens around in a tub or clean sink full of cold water, and then let them soak for a couple of minutes before removing. The greens can then be put to dry in clean towels or paper towels, or put in a salad spinner to remove excess moisture.

Spinach is great raw as a salad green, especially flat-leafed varieties or more tender savoy or semi-savoy cultivars. Spinach is high in oxalic acid, which sticks to teeth and can create a harmless gritty film on teeth. Lemon juice can help dissolve oxalic acid to limit the chalky teeth feeling, and a quick tooth brushing can also remove the oxalic acid once on teeth.

Cooking, especially boiling, can also remove the oxalic acid in spinach. Spinach is great in pasta sauces, stir fries, rice dishes, casseroles, omelets, and frittatas. Keep in mind the high water content when cooking, and make sure to thoroughly dry the spinach before using in dishes like quiche where excess moisture should be avoided. If cooking certain savoy or semi-savoy varieties with particularly dense stems, remove the leaves from the stems before cooking. 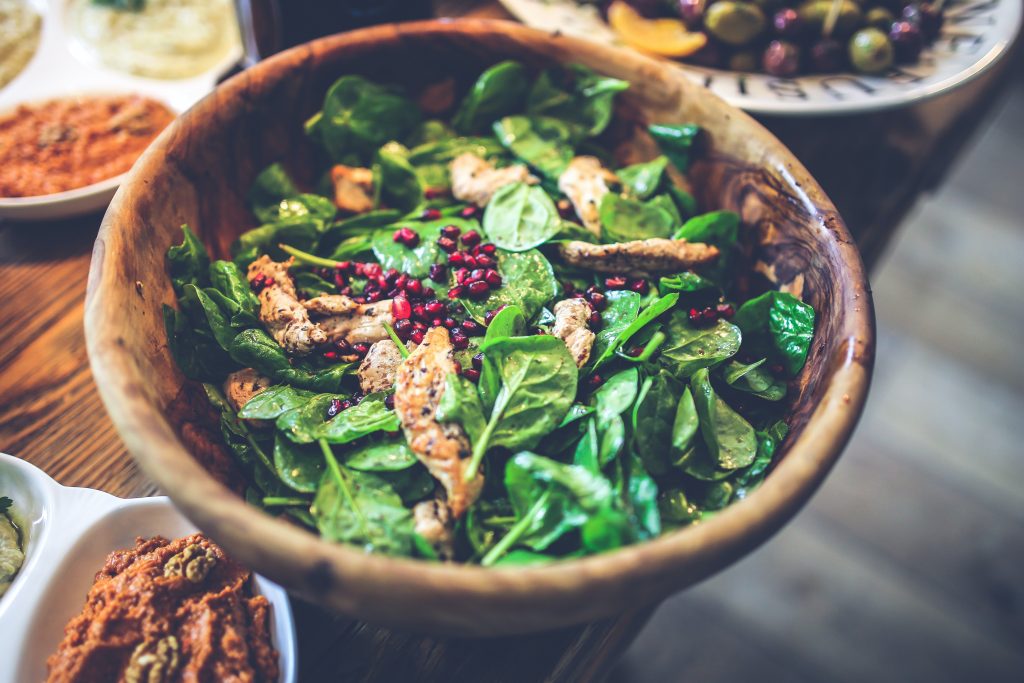 Raw spinach is best kept fresh dry in the refrigerator. Any wilting pieces should be removed. Wrap the spinach in a paper towel and put in a bag or plastic container inside the refrigerator. For longer term storage, spinach can be frozen. Before freezing, spinach should be blanched by submerging it in boiling water for about 40 seconds (until stems soften) and then cooling in cold water. The blanched spinach can then be divided into freezer safe bags or containers and frozen. Alternatively, spinach can also be canned.

In many ways, spinach is an environmentally friendly crop. In terms of water consumption, it has one of the lowest water needs of vegetables due to its short growing season. Like most vegetables, spinach is also a low emissions crop. The primary environmental concern with spinach is pesticide use, so purchasing organic or growing spinach with limited pesticide use can help to mitigate the exposure of both the planet and individuals to pesticides.

5 Tips on How To Build a Better Morning Routine