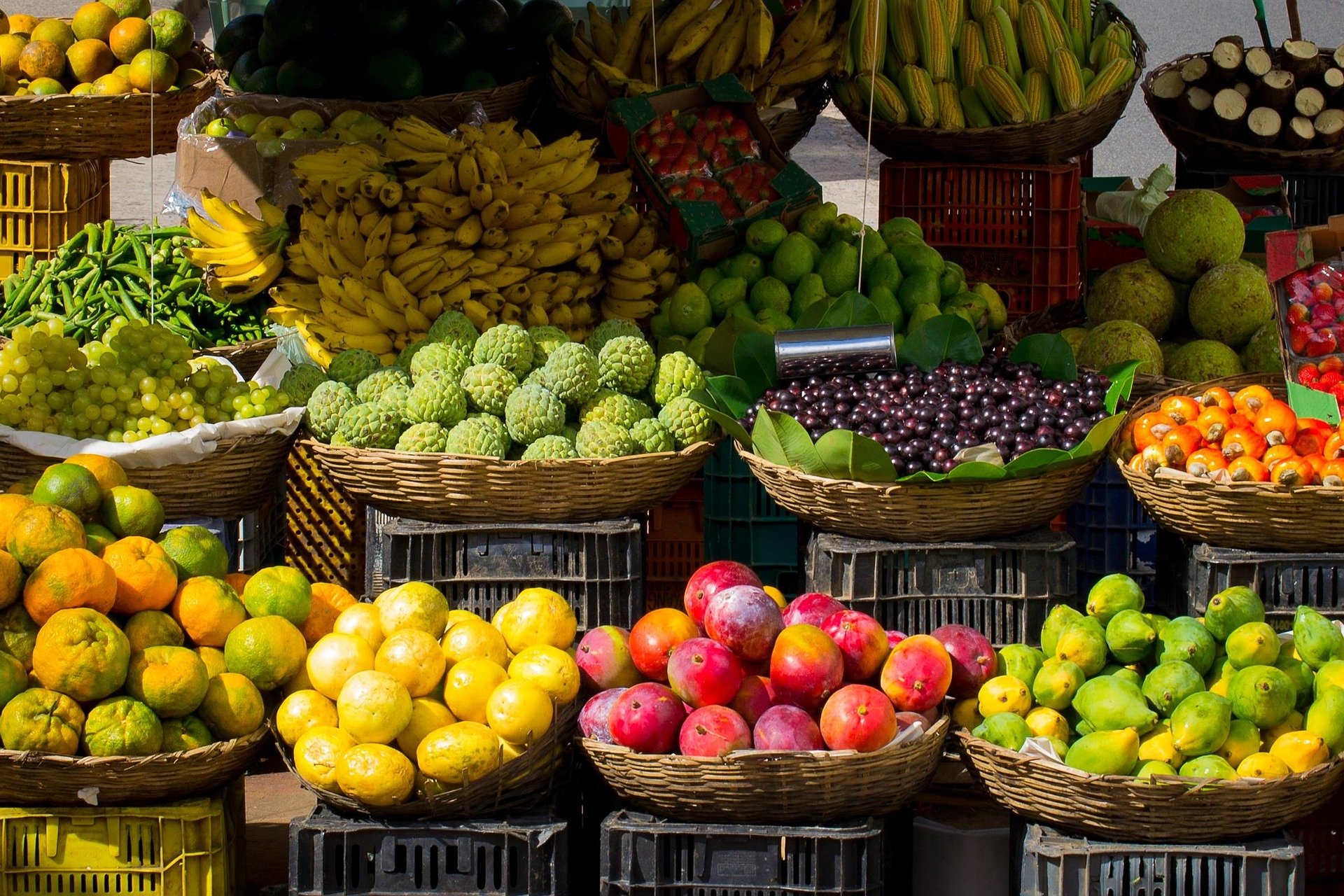 The whole foods diet is generally defined as a diet that limits processed food in favor of less-processed “whole” food. Unlike some diets, the whole foods diet doesn’t have a strict set of criteria, but is instead a more general guideline for eating. A whole food diet, for example, would choose whole grains over more refined grains and homemade pasta sauce over most jarred sauces.

In general, less-processed versions of foods retain more beneficial nutrients. Nutrients are the different things on nutrition labels: carbohydrates, fats/lipids, protein, vitamins, minerals, fiber, and water. The human body needs all nutrients, and not all nutrients are created equally — some carbs provide more benefits than others, for example. The vitamins and minerals the body needs are called micronutrients, and there are numerous micronutrients that are essential to the body, but they include things like calcium, vitamin C, vitamin D, iron, and zinc.

Below are six benefits to a healthy diet, like the whole foods diet, that is rich in micronutrients and good fats and carbs. 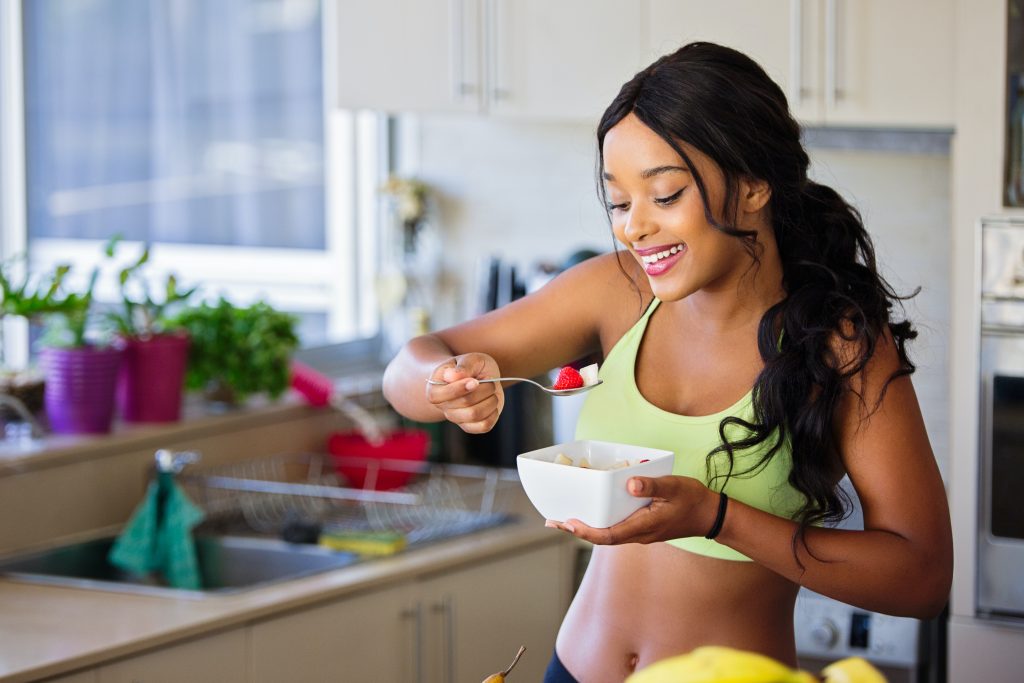 A variety of micronutrients have been linked to lower rates of depression:

Studies have suggested that low rates of calcium are linked to depression in women. There aren’t similar findings for men, but calcium, especially in conjunction with magnesium, appears to be important for women’s mental health. Research has also shown that higher magnesium rates are associated with fewer symptoms of depression for all genders. This is thought to be because magnesium is related to serotonin levels. Serotonin is a hormone with many functions, one of which is helping to regulate mood and happiness. It’s thought that a deficiency of magnesium could cause lower serotonin levels.

Where to find it: Most people know that calcium can be found in milk and other dairy products, but it can also be found in high quantities in greens like collard greens, broccoli rabe, and kale. Magnesium is in fish like salmon and halibut, as well as spinach, swiss chard, and potatoes with skin.

Low levels of vitamin D are also correlated with higher rates of depression. The effect of vitamin D deficiency is thought to be pronounced in older populations, so this nutrient is especially important in aging individuals.

Where to find it: Sun exposure is a great source of vitamin D, allowing the body to naturally produce the nutrient. In darker, cooler months, foods like trout and other fish, portobello mushrooms (after exposure to the sun/UV light), and fortified dairy and non-dairy milks are good sources of the vitamin.

Multiple B vitamins are important for creating serotonin: 6, 9 (folate), and 12. B6 helps to produce neurotransmitters, notably serotonin, and low levels have been associated with symptoms of depression. It has also been shown effective in treating premenstrual syndrome related depression. A symptom of B9, also known as folate, deficiency is depression, and studies have estimated that one-third of depressed patients have a folate deficiency. Similarly, B12 deficiency can cause depression, and the relationship between low B12 levels and depression is especially pronounced in women.

Where to find it: Vitamin B12 is only found in animal products and fortified foods, so good sources for all three B vitamins are fortified breakfast cereals. B12 can also be found in tuna, crab, and fortified soy milk. B6 is in some meats like salmon or chicken, as well as fortified tofu, peanuts, and bananas. B9 has high levels in edamame, lentils, and broccoli.

Omega-3 fatty acids are important for the nervous system, and research has suggested their efficacy in treating depression. They are important for building cell membranes throughout the body, especially in the brain.

Where to find it: Although seafood like salmon and oysters are known to be good sources of Omega-3 fatty acids, they can also be found in high quantities in flax and chia seeds, walnuts, and brussel sprouts.

Research has suggested that chromium is effective in treating atypical depression, a subset of depression characterized by improved mood in response to positive events as well as some combination of oversleeping, increased appetite, sensitivity to rejection, and a feeling of being weighed down. Researchers hypothesized that chromium may impact 5HT2A, a serotonin receptor, or possibly increase insulin sensitivity, which would allow cells to more effectively use blood glucose.

Where to find it: Chromium is found in whole grains and many fruits and vegetables like broccoli, potatoes, apples, and bananas.

Multiple studies have shown that increased levels of iron and zinc are associated with lower levels of depression. Iron is essential for multiple neurotransmitters in the brain, including serotonin, norepinephrine, and dopamine, all of which affect mood. Iron deficiency can also cause mood issues like apathy and depression. As with iron, zinc is thought to affect neurotransmitters, plus some other mechanisms in the body like those for antioxidants and other nerve cell functions. Zinc deficiency can also cause anxiety and depression symptoms, and sufficient zinc levels can actually boost the efficacy of antidepressants.

Vitamin B12 is important for producing melatonin, and — in conjunction with vitamin B6 and magnesium — it has been found to reduce insomnia. Because Vitamin B12 is only found naturally in animal products, vegans and vegetarians must look to fortified foods or supplements to meet this dietary need. Salmon and fortified breakfast cereals are both good sources of all three of these important sleep nutrients. 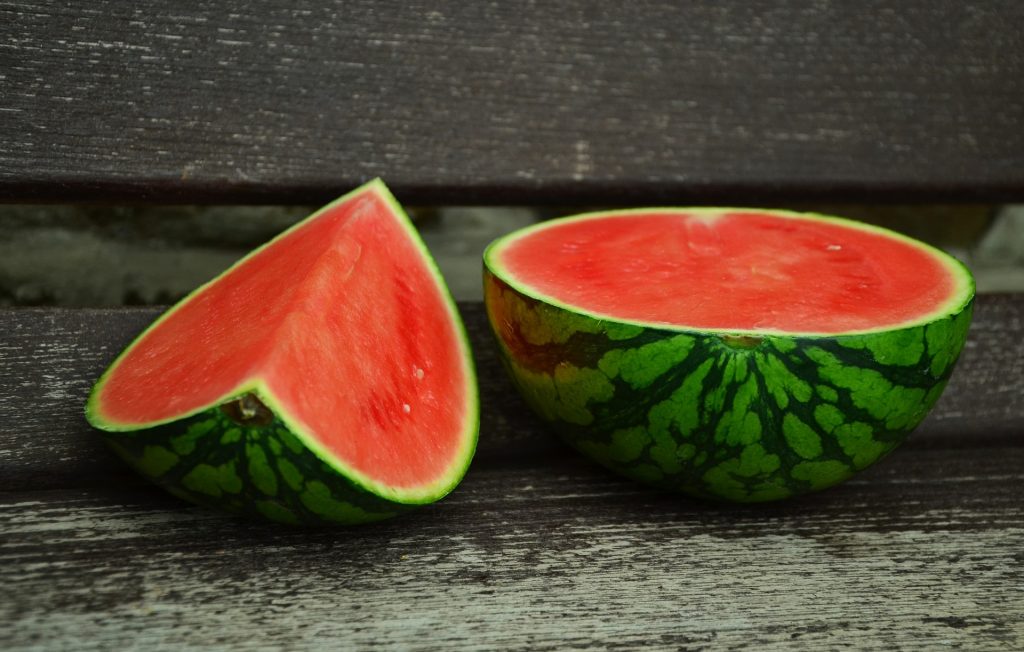 Proper hydration can aid a variety of health problems, from helping headaches to preventing kidney stones. Staying hydrated also helps to prevent muscle cramping after a workout. While it is important to drink plenty of water, especially when working out, foods can also be good sources of water.

Although every individual is different, the U.S. Academies of Sciences, Engineering, and Medicine has estimated that the average man needs about 3.7 liters of water each day, and the average woman needs about 2.7 liters. These numbers include all beverages, as well as food, which is usually about 20 percent of fluid intake.

Whole foods often have much higher water content than their processed counterparts. For example, a baked potato is about 75 percent water, but potato chips only retain a fraction of that: they are only three percent water. A diet high in fruits and vegetables is also often higher in dietary water than a diet with a lot of processed foods, which can help the body stay hydrated. 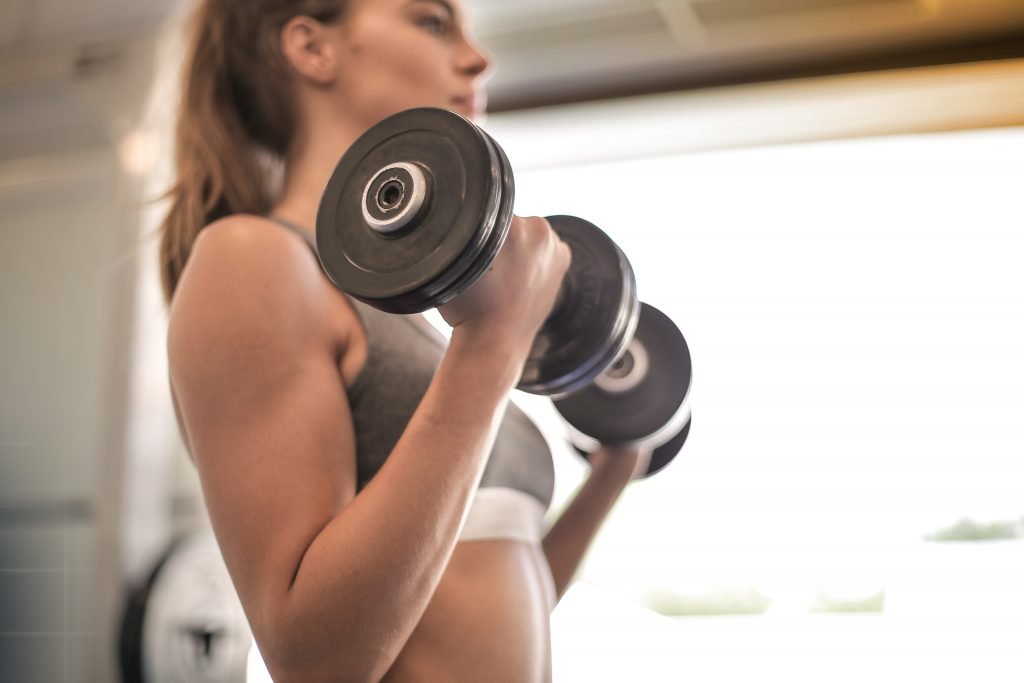 Nutrition isn’t just important for people who are looking to lose weight. It’s also important for anyone exercising to ensure their body is getting proper fuel. Getting sufficient levels of protein and fiber helps sustain the body during a workout because they provide sustained energy unlike sugars and carbs that burn relatively quickly. Complex carbs — including whole grains, potatoes, and fresh fruits and vegetables — digest slower than simple carbs like white pasta, fries, and other processed foods. Food that digests slower will provide sustained energy necessary to power through a workout, so foods high in protein, fiber, and complex carbs can all be good fuel for a workout.

Where to find it: Iron is absorbed in higher quantities from animal sources, like turkey, lean beef, and oysters, but it can also be found in dried apricots, beans and lentils, spinach, and cashews. Vitamin C should be eaten in the same meal; it is in spinach but can also be found in guavas, bell peppers, and kiwi (dried apricots that are high in iron are not a good source of vitamin C because it degrades over time, but fresh apricots are a good source). 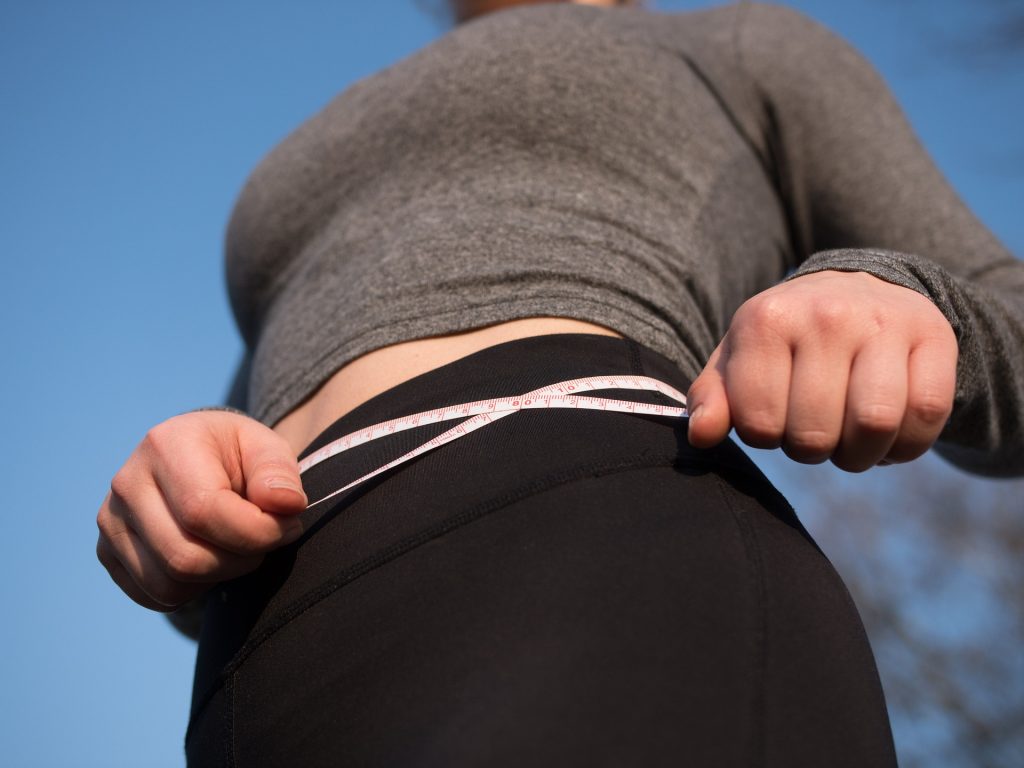 Everyone has heard calories in, calories out. What does that mean? If more calories are eaten than are burned (not just through exercise, the body burns calories in daily activities like walking, sleeping, sitting, and even eating or just breathing), bodies store those excess calories as fat. To lose fat, there needs to be a calorie deficit, where fewer calories are consumed than are burned, to tap into that stored fat.

While people can and do lose weight while eating and drinking processed and traditionally unhealthy foods like chips, candy, and sodas, these foods use a lot of daily calories that can be used on much more filling foods. For example, a 20oz bottle of Coke has more calories than a bowl of oatmeal with blueberries and brown sugar (one cup of oatmeal with 100g blueberries and a tsp of brown sugar). The bowl of oatmeal is much more filling than the bottle of soda, and it also provides more nutrients. The soda does not have any protein or significant levels of fiber or micronutrients, but the bowl of oatmeal has over 20 percent daily fiber, 6.7 grams of protein, and almost 20 percent daily iron. Protein and fiber both help the body feel full. 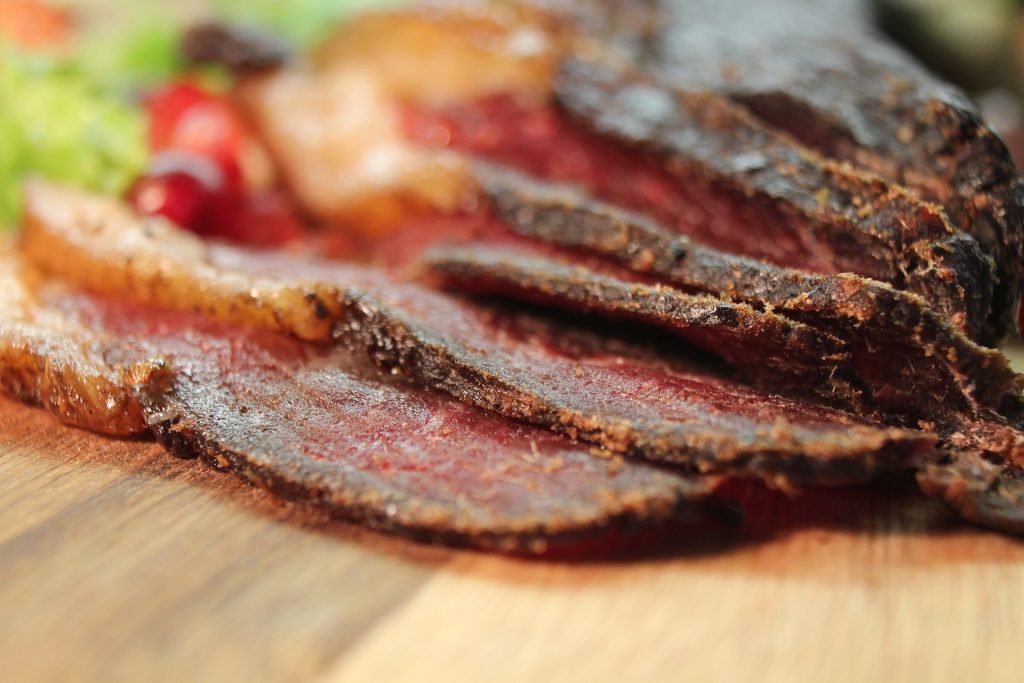 Even for those who are not very concerned with the importance of healthy eating, there may be cause to care about the environmental impact of eating a whole foods diet. Some people focus heavily on the travel aspect of food, and the importance of eating local to lower emissions. Eating local is important to support the local economy and to have a better relationship with where food is coming from, but only six percent of food emissions comes from transport. Buying local versions of foods that are transported via airplane can have big impacts, though. These foods are highly perishable, so they have to be air-freighted to ensure they reach consumers while still fresh. Berries, asparagus, green beans, and mangoes all may be flown into areas. It can be difficult to know whether an item was transported via air-freight, but foods with short shelf lives from far away are likely candidates.

The majority of food emissions comes from meat production. Although a whole foods diet can include non-processed meat, there is mounting health evidence to limit meat consumption, especially processed and red meat. Red meat has been classified as probably carcinogenic by the World Health Organization, and processed meat has been classified as carcinogenic. Processed meats are things like hot dogs, bacon, ham, jerky, and sausage. Processing meat requires additional emissions to the already high emissions of raising livestock. Limiting processed meat, and lowering consumption of red meat generally, can have a significant impact on an individual’s emissions.